Welcome back to Throwback Thursday on Fandom In Stitches! Each week, we revisit our fandom roots by sharing an updated version of Harry Potter patterns from way back before FiS was A Thing!

Here we have one of my all-time favorite Harry Potter-themed blocks, The Knight Bus. After many requests, I've also included an additional version of the pattern with pieced wheels. Both patterns are in one document, link below.

Like all patterns shared during Throwback Thursday, this pattern was originally shared on Harry Potter Paper Piecing, a Livejournal community, and the predecessor to Fandom in Stitches.
For the most up-to-date pattern links for all patterns,
visit our pattern archives using the menu at the top of every page! 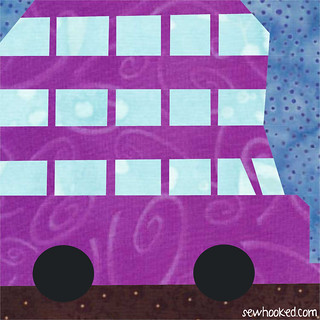 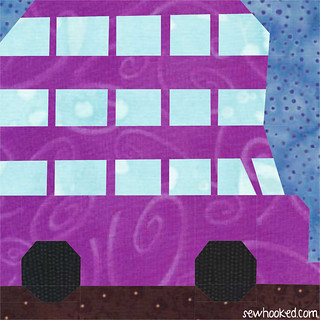 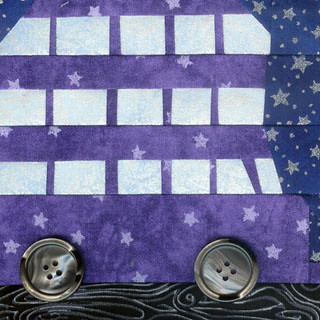 
There was a deafening BANG and Harry threw up his hands to shield his eyes against a sudden blinding light...


With a yell, he rolled back onto the pavement, just in time. A second later, a gigantic pair of wheels and headlights had screeched to a halt exactly where Harry had just been lying. They belonged, Harry saw when he raised his head, to a triple-decker, violently purple bus, which had appeared out of thin air. Gold lettering over the windscreen spelled The Knight Bus.

The Knight Bus originally appeared in my first Harry Potter quilt, the project that started all this fandom quilting madness: My Magical Lens, 2005 - 2007

Fandom In Stitches patterns are,
and will always be FREE.

Don't quilt alone! Join us for quilty discussions and fandomy goodness on the Fandom In Stitches Facebook Group!

Share photos of your blocks and other projects you have made using Fandom In Stitches patterns with our flickr group for a chance to win one of our fabulous monthly prizes! You receive one entry for each project. Only photos posted to flickr are eligible to win.

Fandom In Stitches and it's designers do not hold copyright on any of the fandom titles represented on this site. Respective Designers reserve copyright on patterns only and request that out of respect for the fandoms we love, that you use them for personal and non-profit reasons only. The Designers at Fandom In Stitches receive no payment for any of the patterns posted and expressly forbid resale.
Posted by Jennifer Ofenstein at 4/10/2014 08:00:00 AM