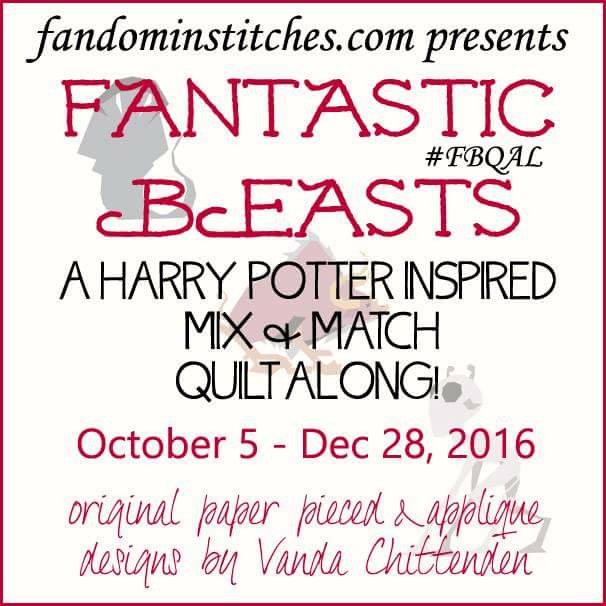 Welcome to week one of our Fantastic Beasts Quilt Along!


All patterns will also be added to the Fantastic Beasts archive here on Fandom In Stitches.


Before we get started there are some important things you need to know.


About the Fantastic Beasts Quilt Along:
Fabric Requirements


Fabric Requirements  for the crib size (all fabric amounts are approximate)

Fabric Requirements  for the Twin size (all fabric amounts are approximate)

Fabric Requirements  for the Queen size (all fabric amounts are approximate)


And now... Finally here is WEEK 1!
All beasts are rated from 1* to 5***** in danger levels.
Reminder! You do not have to make all the patterns, choose which ones you like.
With every beast pattern, the danger level will be shown. If you choose to do the paper pieced star sashing, you can find the pattern below the beasts patterns.
The pattern pieces is not colored in, they have been left blank so that you can choose your own colors. A color chart has been provided for a reference.

Block descriptions from text by J.K. Rowling. Learn more at Pottermore
& from Fantastic Beasts & Where to Find Them.

The Horklump comes from Scandinavia but is now widespread throughout northern Europe. It resembles a fleshy, pinkish mushroom covered in sparse, wiry black bristles. A prodigious breeder, the Horklump will cover an average garden in a matter of days. It spreads sinewy tentacles rather than roots into the ground to search for its preferred food of earthworms. The Horklump is a favorite delicacy of gnomes but otherwise has no discernible use.


The Augurey is a native of Britain and Ireland, though sometimes found elsewhere in northern Europe. A thin and mournful-looking bird, somewhat like a small and underfed vulture in appearance, the Augurey is greenish black. It is intensely shy, nests in bramble and thorn, eats large insects and fairies, flies only in heavy rain, and otherwise remains hidden in its tear-shaped nest. The Augurey has a distinctive low and throbbing cry, which was once believed to foretell death. Wizards avoided Augurey nests for fear of hearing that heart-rending sound, and more than one wizard is believed to have suffered a heart attack on passing a thicket and hearing an unseen Augurey wail. Patient research eventually revealed, however, that the Augurey merely sings at the approach of rain. The Augurey has since enjoyed a vogue as a home weather forecaster, though many find its almost continual moaning during the winter months difficult to bear. Augurey feathers are useless as quills because they repel ink.

(NB! The legs need to be reversed when tracing them, unfortunately my pattern files in my software is corrupted and I am unable to change the pattern. Trace all the pieces as normal, but with the legs, flip the paper over and have a light source behind the paper, so that the legs pieces shows through, and trace the legs that way. :(( ....)

The Glumbumble (northern Europe) is a grey, furry-bodied flying insect that produces melancholy-inducing treacle, which is used as an antidote to the hysteria produced by eating Alihotsy leaves. It has been known to infest beehives, with disastrous effects on the honey. Glumbumbles nest in dark and secluded places such as hollow trees and caves. They feed on nettles.

The Graphorn is found in mountainous European regions. Large and greyish purple with a humped back, the Graphorn has two very long, sharp horns, walks on large, four-thumbed feet, and has an extremely aggressive nature. Mountain trolls can occasionally be seen mounted on Graphorns, though the latter do not seem to take kindly to attempts to tame them and it is more common to see a troll covered in Graphorn scars. Powdered Graphorn horn is used in many potions, though it is immensely expensive owing to the difficulty in collecting it. Graphorn hide is even tougher than a dragon’s and repels most spells.

The Lethifold is a mercifully rare creature found solely in tropical climates. It resembles a black cloak perhaps half an inch thick (thicker if it has recently killed and digested a victim), which glides along the ground at night. The earliest account we have of a Lethifold was written by the wizard Flavius Belby, who was fortunate enough to survive a Lethifold attack in 1782 while holidaying in Papua New Guinea.

Near one o’clock in the morning, as I began at last to feel drowsy, I heard a soft rustling close by. Believing it to be nothing more than the leaves of the tree outside, I turned over in bed, with my back to the window, and caught sight of what appeared to be a shapeless black shadow sliding underneath my bedroom door. I lay motionless, trying sleepily to divine what was causing such a shadow in a room lit only by moonlight. Undoubtedly my stillness led the Lethifold to believe that its potential victim was sleeping.  To my horror, the shadow began to creep up the bed, and I felt its slight weight upon me. It resembled nothing so much as a rippling black cape, the edges fluttering slightly as it slithered up the bed towards me. Paralyzed with fear, I felt its clammy touch upon my chin before I sat bolt upright.  The thing attempted to smother me, sliding inexorably up my face, over my mouth and nostrils, but still I struggled, feeling it wrapping its coldness about me all the while. Unable to cry for assistance, I groped for my wand. Now dizzy as the thing sealed itself about my face, incapable of drawing breath, I concentrated with all my might upon the Stupefying Charm and then  as that failed to subdue the creature, though blasting a hole in my bedroom door – upon the Impediment Hex, which likewise availed me naught. Still struggling madly, I rolled sideways and fell heavily to the floor, now entirely wrapped in the Lethifold.  I knew that I was about to lose consciousness completely as I suffocated. Desperately, I mustered up my last reserve of energy. Pointing my wand away from myself into the deadly folds of the creature, summoning the memory of the day I had been voted President of the local Gobstones Club, I performed the Patronus Charm. Almost at once I felt fresh air upon my face. I looked up to see that deathly shadow being thrown into the air upon the horns of my Patronus. It flew across the room and slithered swiftly out of sight.

As Belby so dramatically reveals, the Patronus is the only spell known to repel the Lethifold. Since it generally attacks the sleeping, though, its victims rarely have a chance to use any magic against it. Once its prey has been successfully suffocated, the Lethifold digests its food there and then in their bed. It then exits the house slightly thicker and fatter than before, leaving no trace of itself or its victim behind.

It is your choice where you want your stars to show up. Example below. 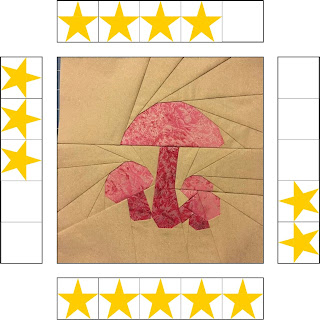 The layout at the end of the quilt along, allows for the stars to be on any side of each beast.
Or just leave the stars out, it is absolutely your choice.
Signature Block Pattern.


If you've participated in events like this with us before, then you know about  the signature blocks! I'd like to invite everyone participating in the 2016 Fantastic Beasts Quilt Along to share a block for a special 2016 Signature Quilt. This quilt is my way of remembering everyone that quilted along in 2016.

You can send your signature block at any time, you do not need to finish the whole quilt first.

Hand or machine embroidery, printed fabric, fabric pen, marker, or stenciled with fabric paint/pen, etc. are all acceptable. Please, no iron-ons or transfers.


You can use any scraps from your bins for this block.