Hi there all you lovely people,
We are back with another Star Trek pattern, this one is from Deep Space Nine, the actual station.

Star Trek: Deep Space Nine is set in the Star Trek universe in the Milky Way galaxy, in the years 2369–2375. In contrast to the setting of the other Star Trek TV shows, it takes place on a space station instead of a star-ship. Makes for a nice change.

DS9 began while Star Trek: The Next Generation was still on the air and there were a few crossover episodes between the two shows. The station's first appearance in TNG was during the sixth season episode "Birthright". In addition, two Next Generation characters, Miles O'Brien and (from Season 4 onward) Worf, became regular members of DS9. The station also appeared in the Star Trek: Voyager pilot episode, "Caretaker".
Enjoy the pattern, I hope to see some finished blocks soon on the Fandom in Stitches Flickr page.
Give me some feedback, do you want more? Because I have loads more patterns I can make. Do you want anything specific? Leave a comment below and let me know.
For more Sci Fi patterns, visit the Sci Fi / Fantasy page here.
Until we meet again.
LLAP
Vanda Chittenden
Quilt In Piece 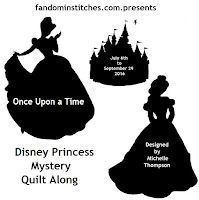