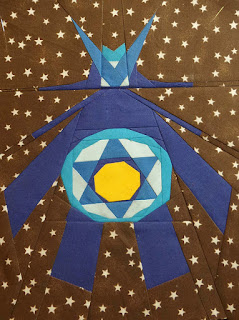 I thought this time, that I will take an element from one of the Star Trek Movies, V'ger.
V'ger appeared in Star Trek the Motion Picture and is the remnant of an unmanned space probe called Voyager 6. A tremendous energy cloud surrounded V'ger, equivalent in size to Earth's orbit.

"On its journey back, it amassed so much knowledge, it achieved consciousness itself. It became a living thing."
– James T. Kirk
I hope you are enjoying the Star Trek Patterns.
Want more, please visit our Sci Fi/Fantasy page here.
LLAP
Vanda Chittenden

Fandom In Stitches and it's designers do not hold copyright on any of the fandom titles represented on this site. Respective Designers reserve copyright on patterns only and request that out of respect for the fandoms we love, that you use them for personal and non-profit reasons only. The Designers at Fandom In Stitches receive no payment for any of the patterns posted and expressly forbid resale.
Posted by Solitude at 11/22/2015 08:00:00 AM