Today we have the Sigil of the House Bolton.

House Bolton is descended from the first men.  They are known of their practice of flaying thier enemies.  The Boltons were loyal to the Starks for a thousand years. Their stronghold is a castle called the Dreadfort and the head of the house is the Lord of the Dreadfort.  The Dreadfort is located on the banks of the upper Weeping Water to the North West of Winterfell.  Legend has it that the Boltons keep the skins of their flayed enemies there. 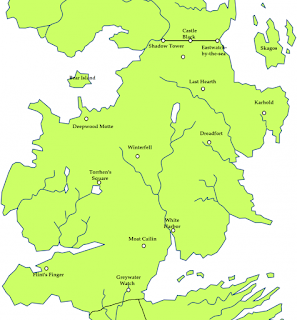 Fandom In Stitches and it's designers do not hold copyright on any of the fandom titles represented on this site. Respective Designers reserve copyright on patterns only and request that out of respect for the fandoms we love, that you use them for personal and non-profit reasons only. The Designers at Fandom In Stitches receive no payment for any of the patterns posted and expressly forbid resale.
Posted by Michelle Thompson at 9/21/2015 08:00:00 AM