Today we have the sigil of the Dothraki.  The Dothraki are nomadic warriors from Essos.  Their groups are called Khalasars and that are led by a Khal.  A Kha'ls closest companions usually become his bloodriders - part guardian, brother and companion, they accompany the khal in his daily routine.They commonly refer to each other as "blood of my blood".

They Dothraki roam the Dothraki Sea (a huge grassland in Essos) searching for pasture lands for their horses and new targets to plunder.  They live by taking what they need including slaves.  The Dothraki fight with curved swords called arakhs, wear no armour and only cut thier hair if they are defeated in battle.

The only Dothraki city is Vaes Dothrak, located to the far north-east of the Dothraki sea. It is ruled by the Dosh Khaleen, crones and wise women who were once the wives of now dead khals.   Dothraki do not trust salt water, because their horses cannot drink it. They refuse to sail in ships over the oceans. Thus they are not generally considered a threat by the Westerosi because they will not cross the Narrow Sea.

A khal who cannot ride is no khal. Custom decrees that the Khan's wife the Khaleesi must ride a mount worthy of her place by the side of the khal. A pregnant woman is expected to ride on horseback almost up to the moment of birth.  A pregnant Dothraki woman will participate in the stallion heart ceremony, in which she will attempt to consume the heart of a stallion under the supervision of the dosh khaleen. She must tear apart the stallion's heart with her bare teeth and fingernails. If she eats the entire heart, she will bear a son who is strong and swift and fearless; if she chokes on the blood or retches up the flesh, the omens are less favourable — the child might be stillborn, weak, deformed or female.

When a Dothraki dies, his horse is sacrificed on the funeral pyre of his master. The Dothraki consume a diet almost exclusively of horse meat, to which they attribute many properties and consequently prefer to beef and pork. 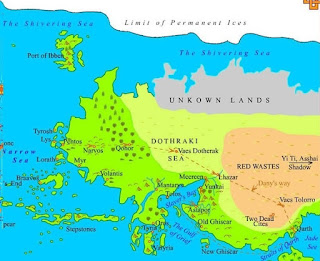 Fandom In Stitches and it's designers do not hold copyright on any of the fandom titles represented on this site. Respective Designers reserve copyright on patterns only and request that out of respect for the fandoms we love, that you use them for personal and non-profit reasons only. The Designers at Fandom In Stitches receive no payment for any of the patterns posted and expressly forbid resale.
Posted by Michelle Thompson at 9/14/2015 08:00:00 AM