Game of Thrones and a bit of Potter(more)

The House of Tarth rules the island Tarth from Evenfall Hall in the stormlands.  The island is northeast of Shipbreaker Bay.  House Tarth is one of the main houses sworn to House Baratheon of Storms End. House Tarth supported Renly Baratheon during the war of the five kings.

Lord Selwyn Tarth (known as the Evenstar) is the current ruler of Tarth with Brienne of Tarth his only surviving heir. 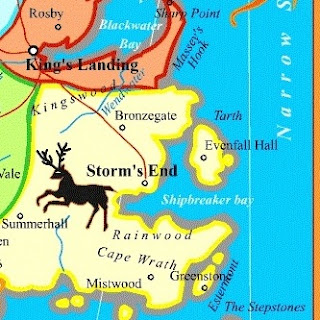 I currently have several Project of Doom Design Invitational patterns being tested. I will post them as they are tested.  This week we have the Deluminator which was created by Albus Dumbledore and gifted to Ron Weasley following Dumbledore's death.

Fandom In Stitches and it's designers do not hold copyright on any of the fandom titles represented on this site. Respective Designers reserve copyright on patterns only and request that out of respect for the fandoms we love, that you use them for personal and non-profit reasons only. The Designers at Fandom In Stitches receive no payment for any of the patterns posted and expressly forbid resale.
Posted by Michelle Thompson at 8/10/2015 07:00:00 AM